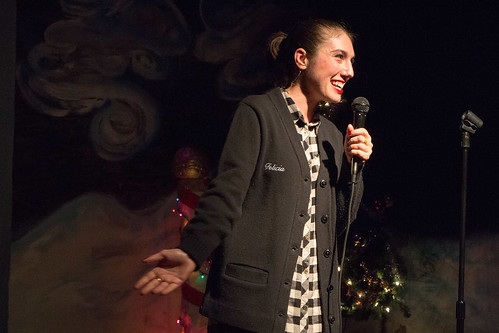 Felicia told her first story with us at our August “Are We There Yet?” jam. She recently joined us again in December for our “Home” jam to share how another story challenged everything she thought she knew. Felicia took us all on an amazing tour of growing up in her hometown of Bakersfield.

Your first story that you did with us in August was pretty good, but this last one was amazing.
Thanks, I really enjoyed telling it.

What changed between your first story and the last one you told at the December Story Jam?
I went to the workshop with Justina (Wu, Beyond Borders co-producer). That made a big difference because one of her suggestions was to tell your story before writing it down. The first story that I performed I had the idea, I wrote the story, then I started reciting it out loud. In the case of this story I just went into a private place in my house, where my roommates couldn't hear me, and started telling the story as if to somebody else, and recorded it. I wanted to see how it would turn out if I was talking naturally.

I wasn't really a big fan of my story when I went to the first practice session. I think it came a long way between that and when I actually performed it. In the last few days leading up to the event I kept telling it, at one point writing it down. But after writing it down I didn't go back to what I had written down. I just kept telling it. I learned what was funny. I learned at what point people started laughing and I started embellishing that part a little more. So I think that was the main difference, not writing it down.

How did you figure out which parts were funny?
In telling it on my own I'd have some idea of what was funny. The night before the event I was hanging out with three of my best friends from Bakersfield. I told them what I'd be doing the next night. They said, 'Oh, tell us!' So I told them and they were cracking up and that really helped me know what was funny. Seeing what people reacted to. But at the event I was surprised because the crowd laughed at things I wasn't expecting. Things I didn't realize were jokes. So while I was telling the story I did a little interacting with the crowd, responding to them in the moment and embellishing.

How did you feel when you finished? Did you know you had knocked it out of the park?
I felt amazing. It felt really different than the first one. Because I had started that one by writing it down then memorizing it, it felt like I just got up on stage and regurgitated what I had memorized. When I told this story I felt like I was telling the story. I was present the whole time I was sharing it. So when the crowd was laughing, I had my wits about me and was able to receive that and take it in while it was happening. When people laugh at the story you're presenting it's hard not to feel good about that. There's this constant energy exchange with the audience that let me know it had gone well.

You had a friend there. What was their feedback?
My roommate Jonathan, who was there at my last one, had really positive feedback. He said, 'Of course I think your last one was good but you did a really great job this time. You seemed much more comfortable'. I also got a lot of feedback from people I hadn't met before, coming up to me after the show and saying they really enjoyed it, how heartwarming and funny it was.

There were some pleasant surprises for me too. When I brought up the troll dolls, the crowd had an immediate response which was funny and surprising. I guess I had built up enough rapport with the audience so they were thinking 'Oh god, what's she going to say about trolls?' They were excited about what was coming next. The thing I liked about the crowd is they wanted to enjoy themselves.

What were the biggest challenges you faced developing your story?
I think the biggest challenge was talking about my mom. I'm revealing a lot about myself and the people in my life. The hardest thing was saying that my mom was in a cult. That's about her life but it's also about my life because it impacted me. I think that's what storytellers are constantly grappling with, exposing ourselves and other people in our lives to strangers. We need to be aware of what we're doing. We need to take it seriously. There's something really exciting and vulnerable that potentially brings people together. I don't think the story would have been as relatable if I hadn't shared that my mom was this really conservative person. She's so conservative that she threw away all my troll dolls and called them demonic. Some people grew up like that. It's a detail that people will say, 'Yeah, I get that. My mom didn't do that exactly but she was like this.' My mom is a really amazing person so I didn't want to paint her like this backward person. I wanted to make sure she was redeemed because that's the person she is. So, yeah, how do you tell a good story and not throw your loved ones under a bus?

Are you going to show her the video?
Probably, she was one of the people I told it to before I performed it. I did leave out the cult part. I did leave in the troll part when I was telling her and she said, ‘Ahhh Felicia ’, she was embarrassed. The other thing is that I never told my grandma I stopped being a Christian. It’s still a part of this whole coming out journey. I'll show it to my mom but I probably won't show it to my grandma.

What are some of the most important things you learned about storytelling?
Tell it to people you love who want to hear you. When I told my story to my best friends the night before, they were rolling. That gave me a lot of confidence. If I just pretend the audience is filled with a bunch of people who love me and who want to hear me then I'll feel as confident as I did with my friends.