Sue Castle's son, Nick, passed away from an illness while serving as a Peace Corps Volunteer in China in 2013.  Although much has been reported in the news about Nick’s death Sue came to Beyond Borders to tell her story in her own voice. 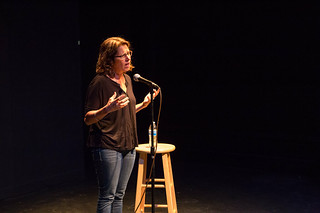 BBS: Your story about the death of your son, Nick is probably one of the most intense stories we have hosted.  What made you want to share your experience?

SC: Nick’s story and what our family has gone through needs to be told.  I am advocating to get things changed.  I am doing this for Nick.

BBS: I remember when you first told your story at the practice jam.  When you finished you could hear a pin drop.  I think everyone was afraid to critique it because it was such a personal experience. Were you concerned about how other storytellers would react?

SC: Yes, but I went there with an open mind.  I’ve taken on this responsibility of telling this story, and I wanted to tell it the best way that I could, honestly and truthfully.  I was hoping for criticism, but it was slow to come because it’s a tough subject.

How can you criticize a parent talking about the death of her child?  But I went there with an open mind.   I don’t know how to do this.  I needed help.

BBS: I think over the process the other storytellers started becoming more comfortable because they felt they were helping by giving you honest critiques.

My first draft was completely different from my last draft.  As I got deeper and deeper into the final draft, I was reliving the story in my mind.  It’s hard to turn that off. So when I was at the event, I could see myself in the hospital and feel these things.  It was hard.  But it made for a more authentic story.

BBS: What was it like working with PRCVs on your story?  At times your story is critical of Peace Corps, and RPCVs tend to be protective.

SC: We got criticism,  going public about Nick’s death and being critical of Peace Corps, but I am trying to step up to change Peace Corps.  I don’t think it’s a bad thing.  I know that people have their own opinions about things.  I try to respect that about other people.

I was hoping the RPCVs would have an open mind, and I think they did.  They listened to my story.
I’ve never been in Peace Corps; so, at the story practices I would listen to the RPCVs and try to imagine how their experiences were.  I think it was a positive experience.

BBS: How did you prepare for the story jam?  Your story changed so much from the practices to the final jam.

SC: After the second practice session, I reworked the whole story.  I read it in front of other people.  I skyped with Justina [one of the story coaches] and got good feedback from her.  I recorded it and played it back.  I practiced it a lot without reading it.  I didn’t want to read it.  I didn’t want it to be memorized.  It’s hard to get to that point because you’re afraid to forget things but I wanted it to come from the heart.

BBS: Were you nervous?

SC: At the jam, I was the last storyteller and that was a tough position because everyone had done so great. Okay, here I am, what if I forget something?  I was nervous. But when I got up on stage I wasn't. It wasn’t my story it was Nick’s story.

BBS: Your story now has over 600 views on YouTube, by far the most viewed story since we began the program two years ago.  What kind of feedback are you getting?

SC: I’ve gotten some pretty positive feedback.  People say you’re so brave.  I don’t think it was brave. I think it was the right thing to do.  I've been given this opportunity so I am going to try to learn from it.

BBS: Has going through the process changed your perspective?

SC: It has changed my views on how people receive my story.   Everybody has an opinion when they read something in the newspaper or online.  But a live story event is different in how people hear things. This was in my voice.   Change your methods to fit your audience to make them more receptive to your message.

I couldn’t have done this story a year ago.  I wasn’t there personally.  My role has changed in working for change instead of demanding or expecting change.

BBS: What advice would you give someone thinking about trying storytelling?

SC: Definitely do it.  Go in with an open mind. The story that you’re expecting to tell is probably not going to be the story you end up telling.  It’s going to change. But if you’re open to the process it’s a good thing.

Get involved in the process even if you’re not ready now.  Maybe down the road you will be.  Everybody is there supporting you, wanting you to do well.

They want to hear your story.