Fire. What Fire?
Will Spargur 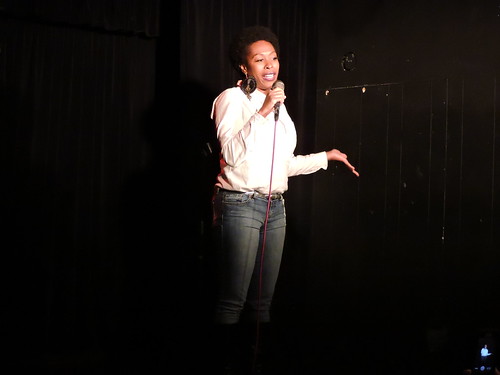 Click on image to watch Shinita tell her story

Once at the practice session, she realized that the stories would be told in front of an audience that would be a mix of volunteers and non-volunteers. She decided to sign up anyway to tell her first story, “Fire? What Fire?” in April’s Lost in Translation Story Jam.

What made you want to try Storytelling?

I didn’t know what it was, I thought it was just a group of Peace Corps volunteers that get together to share stories with other volunteers over pizza kind of like Peace Corps Therapy. Then I realized that I would tell the story to non-Peace Corps people.

Sharing the story gave me a chance to reflect on my experiences and think about what has changed over the years since I returned.

After the first meeting, I went home to think about if I wanted to do it or not. I talked to Justina, who made it feel casual, but it was much more professional than I thought I was still naďve. I didn’t realize that it was in a theater, on a stage with lights!

What happened when you got there and realized you would be on stage?

I freaked out I went in the back and messaged a friend to ask if I should still do it or just walk away! Realistically, I was committed, but I had to really pump myself up.

How did you feel afterwards?

Afterwards, I felt really happy that everyone’s stories were so good. I got to hear them in completion, after all the work people put in them from start to finish. I was happy to be a part of it I felt humbled, extremely pleased, and honored to have my story included with such a great group of stories.

What were your thoughts about the practice session you went to?

I was happy that I went through with it, but it was something completely different than I anticipated. Knowing what I now know, that I would be up on stage in front of a lot of people, I might have tweaked my story, maybe even too much.  I would have given my story too much of a “face lift”. Thinking the experience would be more casual I think that kept my story authentic.

Did you think it was a lot of work or not?

I didn’t put that much work in because I thought it would be casual sitting and drinking coffee and reminiscing about experiences with fellow volunteers so I didn’t practice too much.

Did you invite friends to come?

No. I didn’t realize what it was!

Did you learn anything unexpected?

It surprised me about the stage and the professional aspect. It was better that I didn’t know ahead I like to be prepared, but it worked out to my benefit to not be so prepared.

Would you tell another story on stage?

What would you say to someone who was interested but nervous to try it out?

I would not tell them it’s on stage! That it’s causal and no big deal, and it’s great to share experiences and stories I would encourage them to do it. People have stage fright.  Even if you are nervous and not a great public speaker, it’s a wonderful experience and makes you feel happy. In the end, you wont regret it!